Morse theory is a powerful tool in topology, relating the global properties of a smooth manifold X to the critical points of a smooth function on X. In this note I want to consider the possibility of Morse theory on singular spaces. Some of this dream can be made to work in algebraic geometry, where it helps to analyze the Hilbert scheme of points in new cases.

Morse theory studies a smooth function f on a closed Riemannian manifold X using the gradient flow associated to f. That is, from any point on X, move in the direction in which f is (say) decreasing fastest. In the limit, every point of X is attracted to one of the critical points of f. 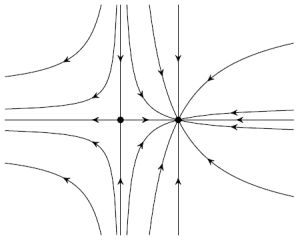 This situation has an analog in algebraic geometry. Consider a projective variety X with an action of the multiplicative group T = Gm. (Over the complex numbers, this group can also be called C*.) Then the orbits of T on X are analogous to the gradient flow lines in Morse theory. In particular, for every point x in X, the “downward limit” of its orbit, limt→0(tx), is a T-fixed point of X (analogous to a critical point in Morse theory). Over the complex numbers, this T-action can actually be identified with Morse theory for the “Hamiltonian function” on X.

Just as in Morse theory, I show that every limit of T-orbits on a projective variety X is a broken trajectory, a chain of orbits that connect a sequence of T-fixed points. An interesting point is that this works without assuming that X is smooth. So this is a possible model for Morse theory on singular spaces.

I give an application to the Hilbert scheme of points on affine space. Namely, let Hilbd(An) be the space of 0-dimensional subschemes of degree d in affine n-space. And let Hilbd(An,0) be the (compact) subspace of subschemes supported at the origin in An. I show that, over the complex numbers, these two spaces are homotopy equivalent. (Computing the cohomology of either space is a wide open problem, in general.) The proof uses the algebraic version of Morse theory described here, using the action of T on Hilbd(An) coming from the action on An by scaling. I hope to see more applications: torus actions are everywhere in algebraic geometry.

Image: A chubby Tom Kitten in a broken pair of pants, from The Tale of Tom Kitten, by Beatrix Potter.