My book is currently available at Amazon for $63.75. 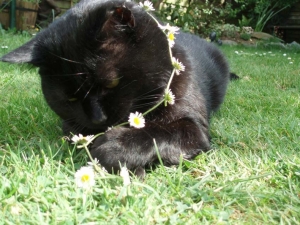 For the past month I’ve been punctuating my life by reading the correspondence between Jean-Pierre Serre and John Tate, recently published in two volumes. Anyone interested in the development of number theory and algebraic geometry will find something to enjoy here.

The book was presumably suggested by the success of the Grothendieck–Serre correspondence, published by the Société Mathématique de France in 2001 and in English translation by the American Mathematical Society in 2003. The Grothendieck–Serre correspondence, beyond its outstanding mathematical interest, has the additional personal fascination of Grothendieck’s story. At first a complete outsider to algebraic geometry, he becomes the master builder of the subject in the 1960s, before rejecting mathematics and, by the end, the rest of humanity.

By comparison, Serre and Tate are reasonable men. The attraction of their correspondence lies in the mathematical ideas that they gradually develop, over the years from 1956 to 2009. Some of the key topics are Galois cohomology (essentially created by Serre and Tate), Tate’s notion of rigid analytic spaces, the Tate conjecture on algebraic cycles, Tate’s invention of p-adic Hodge theory, and Serre’s work on the image of Galois representations, for example for elliptic curves.

Serre usually writes in French, and Tate in English; but both writers make occasional use of the other language for the fun of it.

One running theme is Tate’s reluctance to write up or publish some of his best work. Serre encourages Tate and edits Tate’s papers, but sometimes has to concede defeat. Mazur and Serre started to prepare the publication of Tate’s Collected Papers in about 1990, which would include letters and unpublished work; sadly, nothing has appeared. Serre reports that the AMS has revived the project, and concludes: “I cross my fingers.”

A major topic of the correspondence starting in the 1970s is the relation between modular forms and Galois representations. Deligne and Serre showed in 1974 that a modular form of weight 1 determines a Galois representation with image a finite subgroup of PGL(2,C). At that time, however, it was a serious computational problem to give any example at all of a modular form of weight 1 for which the image is an “interesting” subgroup (that is, A4, S4, or A5, not a cyclic or dihedral group). Tate and a group of students found the first example on June 21, 1974. Soon Tate becomes fascinated with the HP25 programmable calculator as a way to experiment in number theory.

Both Serre and Tate are strongly averse to abstract theories unmoored to explicit examples, especially in number theory. This is a very attractive attitude, but it had one unfortunate effect. One of Serre’s best conjectures, saying that odd Galois representations into GL(2) of a finite field come from modular forms, was formulated in letters to Tate in 1973. But for lack of numerical evidence, Serre ended up delaying publication until 1987. The conjecture played a significant role in the lines of ideas leading to Wiles’s proof of Fermat’s last theorem. Serre’s Conjecture was finally proved by Khare and Wintenberger.

Finally, the correspondence has its share of mathematical gossip. One memorable incident is the Fields Medals of 1974. Tate is on the Fields Medal committee, and Serre suggests “Manin-Mumford-Arnold” as not a bad list, with Arnold as the strongest candidate outside number theory and algebraic geometry. In the event, the award went only to two people, Bombieri and Mumford. At least in the case of Arnold, it seems clear (compare this MathOverflow question) that this was a disastrous result of official anti-Semitism in the USSR, with the Soviet representative to the International Mathematical Union, Pontryagin, refusing to allow the medal to go to Arnold.

I hope that some mathematical readers will go on from the Serre–Tate correspondence to Serre’s Collected Papers. Serre took the idea of cohomology from topology into algebraic geometry and then into number theory. He is one of the finest writers of mathematics. I recommend his papers without reservation.

Photo was from the Cambridge branch of Cats Protection, but a different cat is now featured. 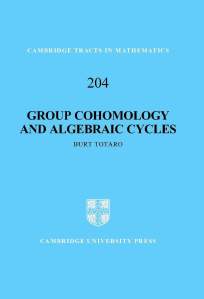 Update (January 11, 2014): Now proofreading. I’ve found a typo in the title of Chapter 8. I misspelled ‘ring’ — pretty humbling. (To give due credit, my editor spotted the typo.)

Original (December 4, 2013):
More about the book at the CUP site (it’s not available yet — I’m checking the copyedited manuscript right now).

You can read the preface in manuscript here.

END_OF_DOCUMENT_TOKEN_TO_BE_REPLACED

I’m about to deliver the final manuscript of my book Group Cohomology and Algebraic Cycles to Cambridge University Press. As a sort of early advertisement, here’s the draft preface. I thank them at the end of the preface, but I’d like to say here too: I thank Ben Antieau and Peter Symonds for many useful suggestions.

Peter Symonds made a spectacular advance in 2010: for any finite group G with a faithful complex representation of dimension n at least 2 and any prime number p, the mod p cohomology ring of G is generated by elements of degree at most n2 (Symonds 2010). Not only is this the first known bound for generators of the cohomology ring; it is nearly an optimal bound among arbitrary finite groups, as we will see.

This book proves Symonds’s theorem and several new variants and improvements of it. Some involve algebro-geometric analogs of the cohomology ring. Namely, Morel–Voevodsky and I independently showed how to view the classifying space of an algebraic group G (for example, a finite group) as a limit of algebraic varieties in a natural way. That allows the definition of the Chow ring of algebraic cycles on the classifying space BG (Morel and Voevodsky 1999, prop. 2.6; Totaro 1999).

A major goal of algebraic geometry is to compute the Chow ring for varieties of interest, since that says something meaningful about all subvarieties of the variety.

The fact that not all the cohomology of BG is represented by algebraic cycles (even for abelian groups G) is the source of Atiyah-Hirzebruch’s counterexamples to the integral Hodge conjecture (Atiyah and Hirzebruch 1962; Totaro 1997, 1999). It is a natural problem of “motivic homotopy theory” to understand the Chow ring and more generally the motivic cohomology of classifying spaces BG. Concretely, computing the Chow ring of BG essentially amounts to computing the Chow groups of the quotients by G of all representations of G. Such quotients are extremely special among all varieties, but they have been fundamental examples in algebraic geometry for more than 150 years. Computing their Chow groups is a fascinating problem. (Rationally, the calculations are easy; the interest is in integral or mod p calculations.)

Bloch generalized Chow groups to a bigraded family of groups, now called motivic cohomology. A great achievement of motivic homotopy theory is the proof by Voevodsky and Rost of the Bloch–Kato conjecture (Voevodsky 2011, theorem 6.16). A corollary, the Beilinson–Lichtenbaum conjecture, says that for any smooth variety over a field, a large range of motivic cohomology groups with finite coefficients map isomorphically to etale cohomology. Etale cohomology is a more computable theory, which coincides with ordinary cohomology in the case of complex varieties. Thus the Beilinson–Lichtenbaum conjecture is a powerful link between algebraic geometry and topology.

Chow rings can be generalized in various ways, for example to algebraic cobordism and motivic cohomology. Another direction of generalization leads to unramified cohomology, cohomological invariants of algebraic groups (Garibaldi, Merkurjev, and Serre 2003), and obstructions to rationality for quotient varieties (Bogomolov 1987; Kahn and Ngan 2012). All of these invariants are worth computing for classifying spaces, but we largely focus on the most classical case of Chow rings. Some of our methods will certainly be useful for these more general invariants. For example, finding generators for the Chow ring (of any algebraic variety) automatically gives generators of its algebraic cobordism, by Levine and Morel (2007, theorem 1.2.19).

We now summarize the contents. END_OF_DOCUMENT_TOKEN_TO_BE_REPLACED 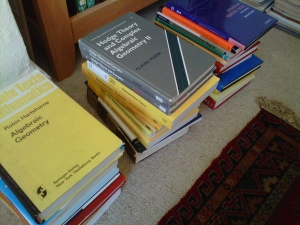 I’ll be spending the academic year 2012-13 at UCLA, and so leaving one well-stocked university library for another. Nevertheless, like every mathematician, I have some favorite books — for research, teaching, and finishing my book — that I can’t be without. After a lot of fussing, in an effort to pack light, I’ve chosen a core traveling library to take from Cambridge to Los Angeles:

Why you should care about positivity

I started this blog about a year ago briefly recommending Rob Lazarsfeld’s book Positivity in Algebraic Geometry, which gives bite-size treatments of many topics hard to find elsewhere.

I’d like to make a stronger case now because it’s an important book. People often give me credit for knowing a lot just because I know what’s in it. It’s rarely on my shelves because it’s almost always in a stack near where I’m working. When I lost my copies in transit between MSRI and Cambridge, I replaced them immediately.*

The title might sound, on the face of it, like something specialized or technical. In fact, positivity is arguably the fundamental difference between algebraic geometry and topology. For example, the intersection multiplicity of two distinct complex curves which meet at a point in a complex algebraic surface S is always positive. As a result, if you know the homology classes of the two curves, then you know the total intersection number N from the cohomology ring of S, and that implies that the “physical” number of intersection points is at most N. This is completely false in topology: you can push around one submanifold to meet another submanifold in as many points as you like. The result is that just knowing the homology class of an algebraic curve controls its geometric properties (it can’t wiggle too much). Much of algebraic geometry builds on this kind of rigidity.

*Not at all painful because Lazarsfeld insisted Springer publish in paperback and keep the price down. Losing Kollár’s Rational Curves on Algebraic Varieties, on the other hand…

Geometry Bulletin Board
Blog at WordPress.com.